Could an activity usually associated with strip clubs ever be considered an Olympic sport? 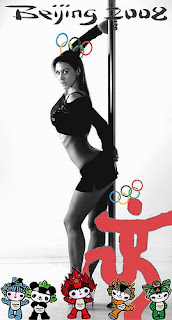 That’s the hope of pole dancers across the country, who say they have collected nearly 150,000 thousand signatures to petition the Olympic committee to make pole dancing an Olympic event.
Supporters point to international championships held the past two years and even liken it to other Olympic events.

“I would look to a sport like gymnastics especially with the apparatus type competition they’re on a horizontal bar we’re on a vertical bar,“ said dancer Jasmin Bristow.

Unfortunately for pole dancing supporters it’s too late for the 20-12 games in London ...they’re closed to any new events.
Posted by soul88 at 3:04 PM