Fact or Fiction? Lebron James' Mom Having an Affair With Delonte West?

Learn How To Make Six Figures in 2019


Get Your Free Personalized Numerology Reading 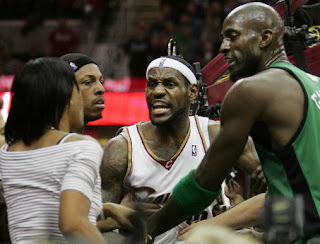 LeBron James' lawyer has finally come forward and denied the internet rumor that started a few days ago and has swept the internet. The rumor states that LeBron's mom was having a sexual relationship with LeBron's teammate, Delonte West, and that LeBron found out about it before Game 4 of their series against the Boston Celtics leading to friction in the Cavs locker room. They went on to lose Game 4, 5, and 6 and the series and many NBA analysts commented on how LeBron seemed unlike himself during the games.  Read More HERE

(Via All Hip Hop)

"....So, I have been waiting for some time now to wait for the denial of the rumor of the weekend. Yes, the rumor that Delonte West and Lebron’s mother Gloria James have a thing going on. But, the weekend came and left and there was no statement, no denial and no comment.

And then I got additional “information” from one of my sources. Dude said this IS TRUE. And, people in those circles have known it for some time. They simply didn’t include LeBron in on it so it wouldn’t upset him. Some people are saying this, even though we don’t know for certain. Sheeeesh…where is the statement…lets end this fiasco! If Gloria James messed around with Delonte West, Cleveland could be the biggest loser."

Do you think this rumor is true?