Kobe Bryant: " I Was...Mentored By The Preparation of Michael Jackson”

In a great piece by Yahoo sports Adrian Wojnarowski,  Los Angeles Lakers' Kobe Bryant  gives a very raw and impactful look at his NBA past, present and future including how the "King of Pop" and not Michael Jordan was a bigger on him: 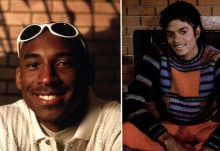 "“We would always talk about how he prepared to make his music, how he prepared for concerts,” Bryant said. “He would teach me what he did: How to make a ‘Thriller’ album, a ‘Bad’ album, all the details that went into it. It was all the validation that I needed – to know that I had to focus on my craft and never waver. Because what he did – and how he did it – was psychotic. He helped me get to a level where I was able to win three titles playing with Shaq because of my preparation, my study. And it’s only all grown.